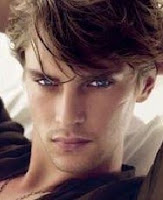 Kris at Kris N' Good Books had a contest not to long ago where she asked people to match the author's inspiration for their character to a picture. There were several great books and the men who the authors were inspired by were all gorgeous. So with that in mind, and having big news, I am going to share who I had in mind when I was writing A 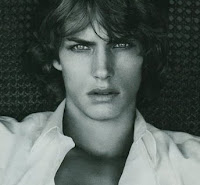 So first there was Jory who you see here on the right and when I saw that Gucci ad for the first time I just fell in love at first sight. But not in the girl-cooty way but in the isn't he pretty way. And that ad was frickin' everywhere a year ago, two years ago, ubiquitous as it were and so I saw it and was inspired to write. And yes, Jory has brown eyes and not blue but hello, nothing prettier in my opinion than this man. And then Leslie read A Matter of Time and of every picture in the world she could have sent me, she sent me the one on the left. And guess what, same model exactly. How Twilight Zone is that? But so you know. In my head, this is what Jory look's like.
Posted by Mary Calmes at 4:36 AM