Two years ago a friend of mine got divorced after 16 years of marriage. I was so sad for her and for her kids and really, even for her husband, who has since remarried. Divorce is sad and I was telling another friend about it and he agreed. I asked if he ever worried about he and his partner calling it quits. He laughed over the phone and said, "are you high? After 19 years? No, honey we're good. And we can't get a divorce anyway since we're not allowed to get married in the first place."
That's such crap.
I have friends who have been together 22 years, 18 years and  27 years, (they just celebrated last weekend), and all of them are gay and none of them live in a state where it's legal for them to tie the knot.
It's hard to even wrap your brain around it.
I've been seeing all these gorgeous commercials lately for Marriage Equality. The one where the guy comes home from being deployed and proposes to the man he loves, I got all teary. And that fantastic one from Australia where it's a whole timeline of a love affair that leads to a proposal...that one I watched like 5 times in a row. But afterwards, after the shmoopy wore off just like it does after I watch Pride & Prejudice, once the euphoria was over I got mad because really, why the hell do those even have to made? Why do people have to be convinced that this should be a right? Why in 2012 are we even thinking about this anymore? Why isn't it just normal? Why can't men and women marry whoever they love? It's just so illogical, so counter intuitive, that I just sit in wonder and think...how? I've shown those videos to my nine year old son and he was all grossed out NOT because there were men kissing but because ANYONE was kissing. We watch Grimm and he gags, we watch Supernatural and he retches. Not over the blood, no bring on the gore, but the lovey-dovey stuff, that's the part he's all grossed out over. The commentary on Marriage Equality?
"Do you think two men should be able to get married?"
"Yeah, why not?"
Of course why not, because it makes sense.
He has uncles, (who are not blood related to him, but in Hawaii everyone is "uncle" or "auntie" your hanai, or adopted family, being as important as the real one), that are gay. They know, both my kids, my daughter and my son, and they don't care. What matters to them is if you play video games with them when you come over, that you take them to the beach or watch movies on the couch. Kids don't care about "gay" unless they're taught to care. Mine don't care. We should try and make sure that even if kids learn prejudice somewhere that everywhere else around them, they see that it doesn't matter. Its why I love all the Marriage Equality videos and show them to them every time I find a new one. And for me, it's why I write romance. In my world, things work out as they should, because even though I got a D in logic in college, I know what makes sense and the more you put it out there, the more videos there are, the more we talk, the more the President says that it makes sense to him too, the more things will change. We need things to change, it just makes sense. 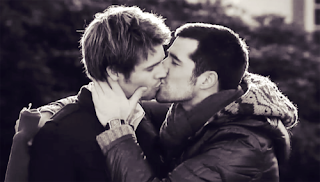 Over the next four days I will be taking part in the
Hop Against Homophobia. If you follow that link, or click the badge at the top of this post, you will get to a page that links to other authors who are also participating. The participants are offering prizes, including me, so please visit as many places as you can.
The giveaway extends from Thursday, May 17th, to Sunday, May 20th.
* Prizes include a signed paperback copy of Acrobat (which will go anywhere in the world, cross my heart) and any Dreamspinner Press ebook from my backlist of your choice.
*Anyone who comments on THIS POST of my blog is eligible to win.
* Winner will be chosen by the randomizer at nine o'clock, HST, (that’s Hawaii Standard Time in case you weren’t sure) Sunday the 20th.
* I'll announce the winner in a separate post.
* Even though I will post again OVER this post, only people who comment on THIS post will be counted.
That's it everyone, thank you for stopping by.
Posted by Mary Calmes at 2:52 AM