Okay so a little catch-up here. BEA was really fun, it was so good to see everyone and very different form a convention. It's a trade show so people come and talk to you and ask questions and that was fun. I got to stand at the booth and show people all the pretty books but what makes it different is that you don't sell anything. So basically they can look at them but only look. That was a totally different animal for me. The highlights were of course being with Elizabeth, Lynn, Ariel, Anne Regan, Anne Cain, Damon, Michael Murphy (who came on the last day), meeting fans, one all the way from Norway, and signing books. The only sad part was that Andrew was sick so he couldn't come. He was missed by all of us.
Okay, I'm sheltered, so as far as cons go, I've been to Yaoi-Con and that's it so when I was told I would be signing books I thought, cool, like in the movies. Yeah, no. Basically, you sit under a number and people come down the cattle chute to have you sing a book for them. As you can see...to the left of me was a  lovely lady signing a YA book and to the right were the Captain Underpants folks so...and I had, blessedly, some very nice people who had me sign books for them. I was a little gushy and unhinged so I'm sorry if I scared anyone but God, I was so thankful that they were there. And I would have lost it completely if Tere Michaels, (yes, you can all squeeee, thee Tere Michaels), was not standing beside me and talking me down off the ledge. And the way I fangirled all over her earlier when she stopped by the DSP booth, you'd think she would have wanted a restraining order but no, she's awesome. It is the absolute best thing ever when people you love and admire turn out to be utterly fantastic. 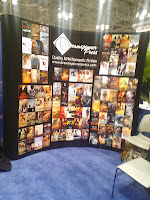 Tere had stopped by earlier to visit with Mr. Suede and so I got to meet her then. And look how pretty the DSP booth is. All the pictures are on individually sized pieces of black foam core and stick to the wall with velcro. I know I'm a geek but I worked at Kinko's for a long time so I can admire the work that went into it. So all in all, awesome four days.