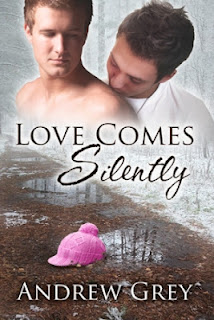 When Mary asked me to be on her blog, I got a huge smile on my face.  Mary is one of the sweetest people I know and she never asks for anything.  So when she asked me to be her guest I was thrilled.    In her invitation she asked me to write about my latest release Love Comes Silently.  This story took me a bit by surprise for a number of reasons.  It started off as a little story, probably a novella, and grew into a full-fledged novel almost on its own.  I was also blown away by how much both Ken, an artist with a sick daughter, and Patrick, his neighbor who can’t speak, really got under my skin.  As I was writing this story both characters talked to me constantly.  It’s wonderful when that happens, but it can also be a bit unnerving when there are two extra people in my head.  (My mother always said I had a big head, but somehow I don’t think that was quite what she meant.)

As a writer one of the things that fascinated about is how people overcome adversity, particularly personal challenges.   I’ve written characters who are deaf, blind, in wheelchairs, as well as characters who are dealing with life threatening illness.  But with Love Comes Silently, I wrote my first mute character and it was an amazing experience.  Patrick was involved in an accident and lost his ability to speak.  This was a relatively recent development for him and he has yet to accept that his life has changed.  He’s also isolated himself from most of the world because he isn’t willing to move on after the accident.  Patrick refuses to learn to sign and there are times he forgets he can’t speak and still talks even though no sound comes out.   But Patrick has a huge heart that he keeps guarded and locked away.  He’s been hurt and he’s lost part of who he believes he is.

Now I’m not going to give too much away, but trust me Patrick is pretty special. I adore this type of character.  As a writer, these characters force me to develop and use new techniques and senses in my writing.  In Love Comes Silently, I had to develop ways for Patrick to communicate without him actually speaking.  Of course there’s the more obvious choice of him writing what he wants and Patrick does that, but as he and Ken develop feelings for each other, another problem develops.  How do you say ‘I love you’ with heart, soul, and meaning when you can’t actually speak?  I did solve this dilemma, but you’ll have to read the story to find out.

I want to thank Mary so very much for having me as her guest.  I love her to pieces and hopefully very soon I’ll get to give her the real hug that goes with the virtual hug I’m sending her now.

Blurb for Love Comes Silently:
Caring for a loved one with cancer is tough. Doing it alone is overwhelming—especially when that loved one is a child. But ever since Ken Brighton’s partner left him, Ken has spent his days at the hospital with his daughter, Hanna, hoping for a miracle. Maybe the mysterious care packages that appear for Hanna don’t qualify, but they bring a spark of hope into his and Hanna’s tired life—and so does Ken’s neighbor, former singer Patrick Flaherty.
For two years Patrick hasn’t been able to focus on anything but the life he should have had. An injury robbed him of his voice, and the idea of introducing himself to new people intimidates him. But over the past months, he’s watched as his neighbor nursed his sick child, and once he meets Ken, Patrick starts to crave a life with him—a life he isn't sure he can have.
Ken doesn’t realize he’s fallen in love until the doctors send Hanna home, saying there’s nothing more they can do: Hanna will either recover or succumb. Ken’s heart is set on a new beginning—with both Patrick and Hanna. But Patrick's silence leaves Ken wondering what Patrick wants.

Excerpt:
Patrick Flaherty had seen the little bald girl’s reaction to the box of hats he’d placed outside the front door of the house she shared with her father. Patrick had found out the man with the beatific smile and eyes so deep it looked like the worries of the entire world would fit inside them was named Ken, and that he was some sort of artist. He hadn’t heard much else about him, other than he was new in town and that his daughter had been very sick. Patrick did know from watching him that the other man who’d lived in the house had been Ken’s boyfriend, but he appeared to have moved out, and now it was just Ken and his daughter. That was fine with Patrick. He’d noticed the other man the very first day he’d moved in two houses down the street from the small house Patrick had inherited from his mother. Not that he had any illusions that Ken had noticed him, other than to see him outside working.
People in town had been talking about Ken and his daughter for months, their tongues flapping like a flag in the wind off Lake Superior. Apparently, Ken Brighton was some really famous artist, with his paintings hanging in museums and selling for big bucks all over the country. That was one thing Patrick had found out very quickly after the accident that left him nearly completely silent—people figured that since he couldn’t talk, he couldn’t hear, either, or think. Patrick clenched the handle of the snow shovel as his anger and hurt welled inside. He was the same person he’d been before the accident, and he wished he could make others see that.
After watching the front of the house for a few seconds more, Patrick let the squeal of joy he’d heard drifting on the wind bring a smile to his face as he returned to his chores. He had to get these done before the snow that had begun to melt hardened into ice he’d never get off the sidewalk.
Patrick worked for nearly an hour, and he was about to put his shovel away when he saw Ken and his daughter come out of the house. He couldn’t suppress a grin when he saw the little girl was wearing the poofy pink hat he’d given her. She held her father’s hand, and Patrick walked closer, waving at both of them. He saw the little girl wave back at him before she pulled her hand from her dad’s and walked down the sidewalk toward him.
“Hello,” she said with a smile. “Thank you for the mac-cheese, it was really good.” Patrick nodded and smiled, watching as the girl cocked her head curiously. Patrick touched his throat and shook his head. “Can’t you talk?” she asked, and he shook his head.
“Hanna, don’t bother the nice man,” Ken said as he came up behind his daughter.
“Daddy, he can’t talk,” Hanna said to him. Patrick was used to the pitying looks or even tsking sounds when people found out, but Ken smiled at him and extended his hand.
“I’m Ken Brighton, and this is Hanna,” he said as he firmly shook Patrick’s hand. Once Patrick let go, Patrick pointed to the embroidered name on his coat. One thing he’d begun doing after the accident was have his name added to his jackets and coats. It was the best way he could figure out to easily tell people his name. “It’s nice to meet you, Patrick,” Ken said with an ease that Patrick rarely saw in others. Most people didn’t quite know how to react to him. “We both wanted to thank you for the macaroni and cheese. It was fabulous,” Ken said, and Patrick began to shift slightly under the other man’s piercingly perceptive gaze.
Patrick smiled once again and nodded, placing his hand over his heart in a gesture that meant their thanks was appreciated.
“We’re going to the store, and then Daddy and I are going to paint,” Hanna told him excitedly.
“We need to get going,” Ken said. “You shouldn’t be out in the cold for very long.” Ken might have been talking to Hanna, but he continued looking at him, almost studying him. “Thanks again for the food. I’ll return the dish later today,” Ken added with a slight smile, and Patrick felt his insides jump a little. Patrick waved as the two of them walked back to the car, and after getting inside, Patrick saw Hanna wave as they drove away.
He’d been attracted to Ken since the first time he saw him. But he quickly found out that he had a boyfriend, so Patrick did what he usually did—pushed his interest aside and went on with life. Granted, he wasn’t sure if the boyfriend was really gone, and if the relationship had just ended, then his handsome neighbor probably wasn’t looking for someone else right away. Not that he’d be particularly interested in Patrick, but he could dream. He watched until the deep green car disappeared from sight before putting his shovel away in the garage and then opening the door to the attached workshop.
Patrick turned on the lights, looking over his woodworking shop and the chest of drawers that he’d been working on. He made his living making fine handcrafted furniture, and he had an order he had to get completed, so he put the way his neighbor moved beneath his clothes and the depth of Ken’s eyes out of his mind and got to work.