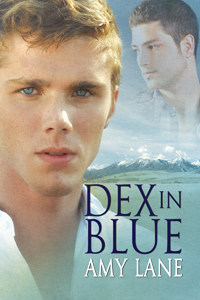 I love Amy Lane's book Dex In Blue. I read it in pieces and I read it all done and when I get to Yaoi-Con, I will pick up the paperback and read it again. Just in case anyone missed it, I simply love it. And so a few months back, Amy wrote a Dex & Kane ficlet, and I get to post it now for your viewing pleasure here on my blog! It's called Twofer and it's not safe for work so if your boss is reading over your shoulder, remember to pull the fire alarm first. Enjoy!

Oh geez-- quiet time? Really? Dex had no meetings, no scenes to oversee, no paperwork... Kane was at school and Frances was at daycare.

He contemplated being bored.

And then he saw his computer and remembered, oh yes! Dex used to play computer games! Let's see... World of Warcraft... when was the last time he'd logged in?

A half an hour later the door burst open. Dex glanced up from beating the holy hell out of a really big troll and saw Kane, his backpack over his shoulder, sweating into the house from the late May inferno.

"You're done already?" he asked, keeping his eye on the screen.

"Finals," Kane said, heading to the water cooler. Dex didn't blame him. It was over one hundred out there. Climate change sucked. Between gulps, Kane managed to ask, "What're you doing home?"

Dex shrugged and fired his mystery weapon. Oh geez-- there went another troll! Go Dex! "Random confluence of circumstance," he muttered. "I can't explain it."

Kane sauntered into the living room, the smell of his heat and his sweat so strong, Dex felt his groin tingling as Kane cleared the kitchen. "I don't even know what you just said," Kane said. "Get off the computer now."

Dex spared a moment to look behind him. "No! I haven't played in months!"

Suddenly Kane was right behind him, so close Dex started to sweat from the heat his massive, muscle-bulked body radiated. Kane bent over and licked his ear. "Dexter, you're not hearing me."

The troll got a good blow in, and Dex grunted--partly from the loss of life points and partly because his groin was swelling suddenly and he was uncomfortable. "You're right next to my ear," he said, trying to keep his concentration.

"Well done," Dex congratulated. He was getting breathless and losing his stupid troll battle. "Seriously, Carlos--I'm proud of you. We should take Frances out to--"

"I'm going to take you into the bedroom and fuck you stupid. Get off the goddamned computer."

Dex made a little sound then, and tried to tell himself it wasn't a whimper. "I was just going to--"

Kane moved, and Dex felt something brush his leg, and his screen went dark.

"Kane, you psycho!" Dex was going to stand up to cop a little attitude, but Kane grabbed his shoulder and whirled him around in the computer chair.

"It's my reward," he said, his brow furrowed, and his eyes narrowed. "We're going to fuck now, okay?"

"Go into the bedroom, get the lube, and stretch yourself out," Kane said patiently, and Dex found himself nodding because doing that was suddenly so much better than killing trolls.

"What are you going to do?" he asked, and Kane grimaced.

"Don't lose your boner--I let him out this morning before I left. But he likes to get comfy with you--I thought I'd put him away so he doesn't get jealous."

"But..." Dex stuttered, not wanting to contemplate the snake crawling up his leg while he and Kane were...

Dex just looked at him, helplessly.

"I mean it, Dexter. Finals. I studied. Go get fucking naked. The first time's gonna be quick."

Dex's erection returned with interest. God... Kane had been studying for a week. Dex missed sex with him, missed the way their bodies felt together, and missed the smell of his sweat and his semen and his...

He shoved past Kane at a run, stripping clothes as he went. His erection didn't go away when the air hit it--in fact, it felt like it got bigger, more swollen, more... oh God. He shoved the blankets down off the bed and pulled the lube out, wanting to stroke himself first before he--

"Don't put lube on your dick!" Kane called out from Frances's room, where the big reptile cages sat, and Dex whined.

Oh God. A week? It felt like a year. He slid two fingers in and groaned and shuddered. Okay, so he didn't get to slaughter trolls. It was all good... slide, retreat, slide, retreat...

Kane's massive heat entered the room, and Dex could smell his sweat again. He shuddered and thrust his fingers in deeper. Suddenly Kane was there, licking his ass cheek, kissing up to his spine, up further, licking the sweat off Dex's body as he went. Dex had to pull his fingers out so he could hold his weight and push up, and Kane kept kissing, to his neck and the hollow of his ear and...

"Ohhhhh..." Dex groaned, just so happy to have their bodies touching. Behind him, he felt Kane's cock, pressed against his backside.

"Missed you," Kane murmured, licking his ear, and down his neck again. "Need to touch you. 's that okay?"

"Are you still going to fuck me?" Dex pleaded, and Kane honest-to-god growled. His big hand suddenly pressed between Dex's shoulder blades and shoved him down, ass up, as Kane positioned his cock with experience and thrust in.

Dex groaned into the mattress, his whole body lit up like the June sky. Oh baby, Kane was home.

Kane pulled back and thrust, starting an easy, mid-speed rhythm that was almost too slow and almost not hard enough. Dex was about to open his mouth and say something about stop teasing, dammit! when he opened his eyes instead and froze.

"Workin' here," Kane hissed, and Dex realized that the teasing was as hard on him as it was on Dex.

"Did you put away the fuckin' lizard?" Dex asked, and looked up again, meeting eyes with the enigmatic Ms. Darcy the iguana.

Kane's rhythm didn't even falter. "Unlike Tomas, she's got no interest in your balls." He drove forward hard, and Dex's attention was suddenly on his ass and not on the damned lizard.

"If I go faster will you forget about the iguana?" Kane was already going faster, and Dex whimpered, closing his eyes and reaching down to stroke himself.

"Go harder too," he begged, and Kane obliged, fucking him hard into the mattress, stretching his ass and hitting his spot and Dex's hand on his cock...

And that did it. Dex groaned from his stomach and his entire cock/balls/ass/taint area gave a huge, almost painful throb, and suddenly he was clenching his ass around Kane's cock and spurting come all over himself, convulsing and screaming and oh gaaawwwwwdddddd!!!! "Fuuuckkk!!!!"

Kane gave a shout behind him and drove in one more time (as much as he could-- Dex was clenching too tightly to give him much room,) and suddenly he was coming and coming and coming, his semen sliding out around his cock as Dex continued to spasm. Kane collapsed on top of him and Dex laid there, panting, sweating, and...

And looking the fucking iguana in the eye.

"Kane," he panted, because Kane wasn't moving, and the guy was heavy.

"How come all your scaly things are gay?"

"What?" Kane rolled off of him in shock.

"Your male snake wants to sleep with my balls and your female iguana wants to watch us fuck and get off on her own." Dex turned his head so he could watch Kane think about this. He loved the way Kane's eyes unfocused when he was turning his thoughts inward. It made Dex so proud of him, and the unusual way he thought, the perfect, simple way his mind worked.

"You know, I've got no idea," Kane said after a moment. Then he grinned. "Really, as long as I'm the one sleeping with your balls and you don't make me get off on my own, I could give a fuck."

Dex grinned at him, sleepy and sated, and then Kane's brown eyes started to sharpen in their focus.

"Which reminds me, Dexter. Roll over. I wanna clean you off with my mouth."

"Gungungh..." His brain shut off again, just like the computer, and he couldn't even think of why he should make Kane go take the lizard back to her enclosure. Kane shoved him over on his back and then sucked Dex's erection into his hot mouth, lifting his head to say, "Play with your nipples. That makes you hard faster," before trying to slurp Dex's brains through the end of his cock like a straw.

Dex sure hoped that damned iguana enjoyed the show, cause she got a twofer.
Posted by Mary Calmes at 12:05 AM