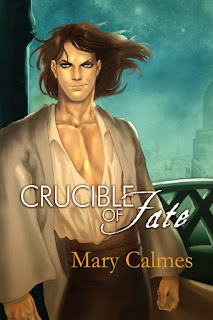 Hey everyone, just a head's up that Domin's book ,
Crucible of Fate, has a release date of Wednesday,
November 21st and I'm very excited. Terrified, but excited.
Here's the blurb:

In the secret city of Sobek, Domin Thorne is making his way as the newly chosen semel-aten, the leader of the werepanther world. He aspires to make sweeping changes—he’s set goals for himself and the people he chose to bring with him, modeling his reign after that of his friend, Logan Church. But Domin may have set too lofty a goal: his normal leadership style isn’t working.

While juggling a homesick Crane, a moody Mikhail, a bullwhip-wielding Taj, servants with murderous intentions, a visiting ex, and a mate on a dangerous goodwill mission, Domin has to figure out his new role alone. He also must determine how to deal with a conspiracy, all the while falling hard for a man who, for the first time in Domin’s life, reciprocates that love. Whether Domin is ready or not, Fate has stepped in to teach him a lesson: internal threats are just as dangerous as external ones.

And didn't Anne Cain do her usual fantastic job with the cover?
Posted by Mary Calmes at 6:28 PM