The blob ate my morning 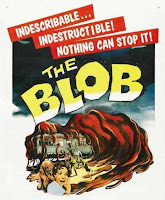 It's no secret that I hate November. Seriously. The only good thing about it is Thanksgiving. Its my birthday month and that's some of it because its cursed. I own a copy of The Secret Language of Birthdays and my day is The Day of the Reformer. Its a fun book and mine's like a first edition so you know I was all into it but really it doesn't make the day any cooler. Or November any better.

For whatever reason, as I've bored you with before, October is my power month. My husband will tell you it's because I'm a witch and he doesn't mean that in a nice cool wiccan way either. But so I come off the high of October to the low of November and no matter what my step-mother says about a self-fulfilling prophesy (she's always positive which I didn't' used to appreciate but I do now) I really do think the damn month is cursed. Today was seriously the cherry on the cake of the month.

I woke up and was going to make coffee and proceeded to drop the coffee grounds from the paper filter All Over My Kitchen. And it's wet and clumpy and I scared the cat who's always annoying and underfoot but was smart enough to beat it out of there. So there's grounds and the smell and that oily sticky globby-blobby mess and one kid needs cereal and  lunch made and the other kid needs a bagel and lunch as well. So there's cleaning and the regular morning and no coffee being made and then my husband who swore he would iron his own shirts wakes up late and yeah, needs a shirt ironed. Grrrr....

I don't iron well. I can't cook. I kind of suck at domestic tasks. I can load the washer and the dishwasher, the dryer, sweeping, mopping, I'm your girl but ironing is just vile. But I do it and then there is frost on the windows and did I buy a scraper? I'm sorry, my Honda is in the garage and we moved from Hawaii. What in the world do I need a scraper for?

Okay so my husband has to scrape the car, I run the first kid to school and guess who forgot his lunch? So school, home, and back to school and then home. And the whole time I'm telling myself, don't forget the second kid's lunch when you have to take her to school. But did I remember? Oh hell no. So again, school, home, school, home...and by this time I'm a whiny mess right? So I stop on the way back from delivering the second lunch to go to the store. I get a scraper, snacks for lunches, a sandwich for my lunch later, a blueberry muffin and stop at the Starbucks to get the coffee I need. Muah hah hah! Guess where that cup went? Yes, on the snugly coat that's fake fur and makes me look like a bear. I thought it was kicky. Turns out it makes me look fatter then I already am!

On the way up the stairs at home, I miss the step, and bang my knee. Once I'm inside, in a house that reeks of day old coffee grounds, I use the electric kettle to boil water and make tea and finally I sit and have my muffin. It's cranberry, not blueberry. All this before nine-thirty in the morning. And I only recount the horror to drive home the point about the heinousness of November. I would like to thank Cardeno C. who listened to my tale of woe this morning, commiserated and offered an upbeat theory as to why it all went south. Amy Lane who wrote a ficlet that made me feel better but also cry which was cathartic. And Ellis Carrington who said it was just the full moon and promised that it would pass with a very needed there-there thrown in for good measure.

Are there worse days? Heaven's yes. Am I whiny? Very. Is everything better now at close to ten at night? Yes. But can I just say? Bring on December. Damn.
Posted by Mary Calmes at 10:04 PM