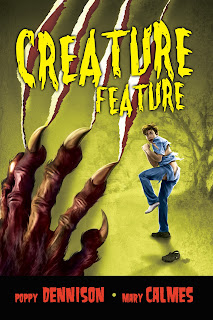 So Creature Feature, the anthology I did with Poppy Dennison is out on March 20th. I will be very interested to hear what you all think of it. Here's the blurb:

Thanks to his good-for-nothing brother, Andrew Hughes is up to his eyeballs in debt and needs a job fast. When a nursing position opens up in Myerson, Arizona, Andrew has no choice but to take it, despite a warning about how difficult a patient Caleb DiMartino can be. Andrew can deal with a little trouble—but Caleb’s strange family, the armed guards, and the unknown cause of Caleb’s mysterious illness may be beyond his skill set.

For three years, paranormal courier Frank Corrigan has been working for incubus demon Cael Berith. Cael knows Frank is his mate, but Frank is pretty sure Cael doesn’t even like him, never mind want to spend the rest of his life with him, so their personal relationship is at an impasse. When Frank’s sister, Lindsey, gets bitten by a werewolf she's sleeping with—and possibly witnesses a murder—Frank rides to her rescue. If he’s lucky, he might just save his love life too.

Didn't Paul Richmond do a fantastic job on the cover? Instead of doing a cover that was overly busy, the cover represents Poppy's story and that his her boy Andrew there on the cover. How cute is the Croc?
Posted by Mary Calmes at 10:59 PM