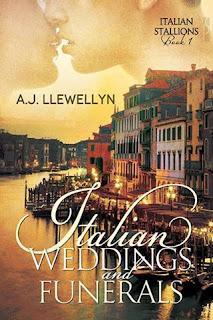 Italian Weddings and Funerals , Monks' Rooms and Working for Saucepans
by A.J. Llewellyn

I want to thank my wonderful friend, Mary Calmes for letting me invade her blog today to talk about my new book,  Italian Weddings and Funerals, coming to Silver Publishing this weekend.
Yes, it's a re-release. Originally published a few years ago, once the rights reverted to me I put it with Silver and eagerly anticipated a wonderful cover by the divine and amazing Reese Dante. She didn't disappoint me and I am thrilled with the new, edited version of my vampire story.
It's the first book in a new series called Italian Stallions. Italian Weddings and Funerals is a catering company owned by Luca Dell'Oro, a several hundred-year-old Italian vampire. Even though he doesn't require food, he loves it, and though he doesn't have love, he loves that, too.
Luca throws the best weddings and funerals in the business.
He has a quirky staff, including Zaria, a zany woman who supplements her income as a hooker. But she's an unusual hooker. She doesn't actually sleep with her clients. They have a breast fetish and um, they're often broke, so she accepts payments in the form of cookware!
I based her on a woman I once worked with…
A lot of passion went into this story since I am a serious foodie. I was also glad to be able to use a bit of my obsession with monks' rooms in this tale. I happened to be visiting the City of Ten Thousand Buddhas (don't  you just love that name?) up in Talmadge, Mendocino, CA, and was so taken by this majestic place, that I was determined to fit it into one of my stories.
I talked to a monk there who told me that originally a hospital built in 1889, it fast became a refuge for Catholic priests traveling up and down California's coast and for visiting Buddhist monks in later years. By the time those who reached the hospital made it, they were exhausted and sometimes badly injured. For those unfamiliar with the state's history, the priests were easy targets for the bad guys who assumed they carried gold.
He told me that the priests were given refuge in houses along the way where the residents allowed them to stay long enough to recover from injuries, or the sheer energy it took to travel by horse all that way.
Priest holes or priest hides, and monk cells, or monk rooms, exist all over the world. Some of the fanciest, most historic homes in England have them.
Here is a link to the most famous. The illustrations of some of these show the hiding places to be so tiny it's amazing a grown man could fit inside them:
http://www.gutenberg.org/files/13918/13918-h/13918-h.htm