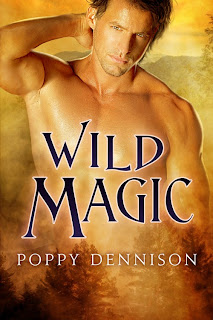 Today I’m excited to be hosting the wonderful Poppy Dennison here on my blog answering questions and talking about her newest Dreamspinner Press release, Wild Magic which is the fourth in her Triad series. The novella will be available Wednesday, September 25th.

What made you decide to write Joseph and Dominick’s story?

Joseph and Dominick’s story was actually started before the Triad series began. Those of you who follow me know that a friend of mine wanted to read a gay paranormal where one of the main characters had a child. Well, Wild Magic was the story I started to write first! For some reason, the story just didn’t come together in my mind. The opening few chapters were there, but after that, I had nothing.

I tabled the story and began developing what would become the Triad world with Simon and Gray and the High Moon Pack. As I sketched out the series, I realized why I couldn’t write what would become Wild Magic…it was because the worlds were intertwined. After I finished writing Simon and Gray’s stories (Mind, Body, and Soul Magic), I wanted to come back to this original idea. Next thing I knew, I had the entire plot figured out.

Do you have a favorite character or couple of all the ones you have written?

I do! Garon, Alpha Gray’s 10-year-old son in the Triad series, is my favorite. He’s based on my now 13-year old nephew and I absolutely love that I was able to capture a little bit of him in these books.  Garon has an “old soul” and I love that about both the character and my nephew.  One of my goals in the Triad books was to have children characters that were important to the plot and not just there as fixtures. Anyone with kids knows that family life tends to revolve around them.  Garon, and later Riley, were important to the Triad world and the books wouldn’t be the same without them.

Do you have anything coming out soon that you want to tell us about?

I had another release earlier in September. Accidental Alpha is my first book with Wilde City Press. It’s a paranormal novella, and I’m told it’s a bit of a comedy! I mean I guess it is pretty funny that a toddler bits a gruff former cop and turns him into an alpha werewolf…. *g*

Other than that, I’m working on a new paranormal novel that I’m really excited about. It’s still being written so no release date is in sight but I’m enjoying doing the research and developing a new world. I’m also writing what I hope will be my first contemporary. It’s been fun to work on, but it’s so much harder for me than paranormal! LOL What can I say? I love my shifters!!

Why paranormal? What about it draws you in?

You know, someone else asked me that recently when I confessed to struggling with my first contemporary. I think paranormal works well for the way I write…I like to have the world built first and then I fill in the plot, if that makes any sense at all. So, for the Triad world, I had the three types of magic, what they could and couldn’t do, which types of paranormal creatures had which powers, and then I was able to create characters and plots that fit within those boundaries. Although world building is limitless in many ways, I also am able to limit what my characters can and can’t do before I begin writing. I guess I need the limits! (Noooo….my inner muse is crying about that even as I type it!)

An excerpt from Wild Magic:

Joseph’s mind couldn’t wrap around the idea. He’d seen it with his own eyes when Krista changed. But this was Dominick. His friend. The first guy he’d… no. He couldn’t go down that path again, even in his own thoughts.
Dominick nodded his reply before speaking. “Werewolves are real, but maybe not in the sense you are thinking. It’s… different.”
“Show me,” Joseph demanded. He needed to see it with his own eyes. Part of him still didn’t believe that Krista had really transformed from the animal to human.
With another nod, Dominick began removing his button-down shirt. His white undershirt came next, revealing Dominick’s tan, muscled chest.
Joseph’s heart began to race. He hadn’t thought about the clothes issue. Dominick was stripping down right in his kitchen. Their eyes met, locked on each other as Dominick’s fingers began working at the button and zipper of his jeans. In their younger years, they’d gone shirtless often. The hot summers combined with sweat and fun and more. Everything had been more when he’d been with Dominick. How much of that had been because of the secrets Dominick had kept from him for so long? And now, here was adult Dominick stripping down and staring at him with such need, such anticipation. His eyes sparkled with it, his breath quickened. Joseph’s body responded in kind.
“Are you sure you want to see this?” Dominick’s voice was husky, his expression both eager and hesitant at the same time.
Joseph took a breath. “Yes.”
Dominick kicked off his shoes before removing the rest of his clothes. Joseph had barely caught a glimpse of his naked body before Dominick threw his head back as his body began to change. Where Krista had convulsed, clearly in pain, Dominick simply trembled as his body began to transform. He shimmered, changed. Moments later, a large mountain lion stood where Dominick had been seconds before.
It was real. Dominick had just transformed in front of him, laying any doubts of Joseph’s sanity to rest. He hadn’t imagined it. It hadn’t been a nightmare. A mountain lion was standing in his kitchen, looking at him with the same needy expression he’d seen in Dominick’s eyes moments before.
Joseph had never been this up close and personal with a wild animal—no, Dominick wasn’t a wild animal, was he? His heart raced, pounding so hard Joseph could hear the thud-thudding in his ears. Dominick’s golden, fur-covered skin shone under the kitchen lights. Sunlight drifted in through the door, adding another layer of color to Dominick’s animal form. He was beautiful. Joseph longed to touch. Would his fur be soft, or would it prickle? Could Dominick purr? Could Joseph make him purr?
He took a half step forward, ready to test the notion, when clattering steps came from the deck. The door burst open, and Joseph froze in his steps. Avery and Blake both ran to their uncle and began to rub against him. He—the animal, Joseph couldn’t quite get his brain to accept that it was really Dominick even though he’d seen the evidence with his own eyes—rubbed his face against them and let out a rumbling purr that both boys echoed with their human voices. It answered his question, though. Dominick could purr.
Joseph’s knees went weak, and he slid down the counter until he sat on the floor with his knees up to his chest. “My God,” he whispered.

Joseph Anderson was heartbroken when his childhood best friend Dominick Levent moved away. Years later, Joseph is a successful real estate broker with good friends, an easy smile, and a stunning house. When he finds a dying mountain lion who miraculously shifts into Dominick’s sister, Joseph must find Dominick and reunite him with the two young sons she left behind.

When mountain lion shifter Dominick gets a call telling him his sister is dead, he rushes home to protect his nephews and avenge his sister. Seeing Joseph brings back the feelings Dominick tried to bury and he dares to hope Joseph’s newfound knowledge of shifters means they can finally be together.

A sassy southern lady, Poppy Dennison developed an obsession with things that go bump in the night in her early years after a barn door flew off its hinges and nearly squashed her. Convinced it was a ghost trying to get her attention, she started looking for other strange and mysterious happenings around her. Not satisfied with what she found, Poppy has traveled to Greece, Malaysia and England to find inspiration for the burly bears and silver foxes that melt her butter. Her love of paranormal continues to flourish nearly thirty years later, and she writes steamy love stories about the very things that used to keep her up all night. If her childhood ghost is lucky, maybe one day she’ll give him his own happily ever after.
Visit her on her web site: http://poppydennison.com/
Facebook: http://www.facebook.com/poppydennison,
Twitter: https://twitter.com/PoppyDennison
Goodreads: http://www.goodreads.com/author/show/5108648.Poppy_Dennison
Posted by Mary Calmes at 1:27 AM