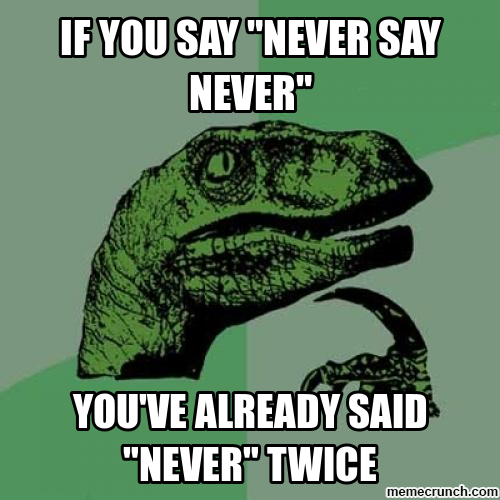 Its a bad word, never.
Never.
Will you write a sequel to Timing? No, never. Change of Heart? No, never. Every single time I say I won't do something, I get an idea and then there I am writing a sequel. The latest one is OLNL. I didn't plan to write anymore in that universe at first and then it was maybe yes, maybe no, and then it was going to be three and now it looks more like just one so in light of that...vacillating... I've decided to not use the word anymore. No more never. When people ask me from now on, will this novel be a series, I'll just say, I seriously have no clue but the whole one and done answer isn't working. I've only ever planned one series and even that didn't work how I thought it would. So I'm kicking the never to the curb.

I also need to start thinking about character names more. I mean normally I agonize, for days, over the perfect names for my main men. I have this thing where one name has to be fancy or not heard a ton, Jory for example, and the other one is plain Jane, like Sam. So Logan (dull) and Jin (cool), Rand (which I love and I've never met a Rand in real-life) and Stef (who I've known many, both men and women). Quade which is interesting and Roman which is way more common. I've noticed lately however that I am not giving my secondary characters the same depth of thought and with the sequel thing happening more and more often, I'm getting stuck. For instance, Aaron and Duncan. Those two names should not go together for a whole slew of reasons the biggest two being that they end with the same sound and both have an N as the last letter. Yes, this is dumb, but its my naming thing. I also love to make lists and fill out paperwork but that's a whole other thing. My friends laugh at me, *coughCardenocough*, but really, would I have named a character Linus if I thought he'd ever be a main one? I mean, Linus is a great name but not one I would have pulled out of a hat. You read so many fantastic ones, Carrick, Deacon and Zev, Sionn, Wolf, Griffin, Silas, Orlando, the list goes on, that if I had given this any forethought, Linus would not have been what I would have gone with. Its just like with the background of some secondary characters. I have been known to throw out who they are and where they came from willy nilly because I never thought in a million years that I would be writing from that character's POV. And then...so I've decided the cure for all of this is to figure that everyone is important until I leave the world behind. Like I recently submitted a book about two marshals to DSP that's expected to be out in late June or early July, that I have some characters from another book and I had to go back and check the list. I was not pleased to see the non-creativeness of my choices. All of this stems from using the word "never" so I'm done with it. I would say I'll give it up for Lent and see how it goes but I already gave up soda and I'm having trouble. We'll see how long I last.
Posted by Mary Calmes at 1:04 PM