Cover Reveal for Stripped Away 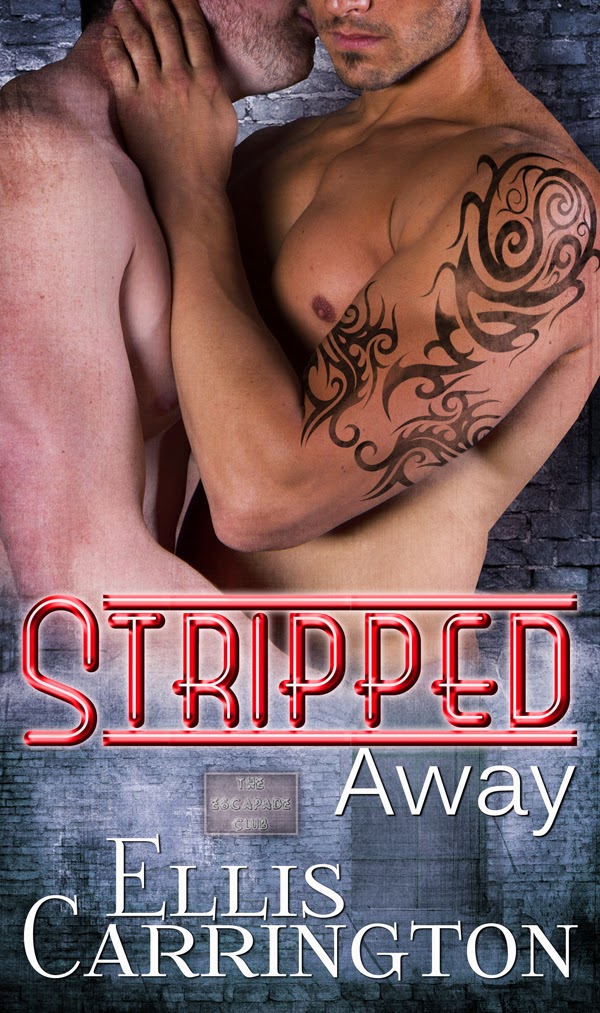 Today I'm excited to have  Ellis Carrington here sharing the cover of her new book, Stripped Away, sequel to Stripped Clean, which is David and Ricky's story, out August 1st.

HE DOESN'T RECOGNIZE HIMSELF

David Moorehouse has spent his life hiding behind masks. Nice guy. Best friend. Reverend's kid. After finding his father dead on the floor, he’s stripped of his job at the family church and his identity as the quiet, nice guy. The life he knew is over, and he doesn’t know what to do next.

HE KNOWS ANGER BETTER THAN ANYONE

Ricky Slade is itching for a fight. By the time he meets David, he’s struggling to save his business, his best friend, his drug-addict brother, and his own sanity. He’s got no patience for his business partner’s judgmental brother showing up and getting in his face.
Their angry heat turns into a fiery inferno, but Ricky's fresh off a bad breakup, and David is getting guilt-tripped by his family and his ex. Every time they fight, they fall into bed, but will that be enough when things around them come apart?

“You know—” Dave made a disgusted noise in the back of his throat. “Never mind. I don’t know what you’re talking about and I don’t want to know.” He threw his stuff in the rear of Ricky’s cab, then turned to jab a stiff four fingers into the center of Ricky’s chest. “Least we can agree on the dickhead thing. I mean, who shows up to a funeral with a firearm?”
Ricky didn’t show up to funerals at all when he could help it. Easier to avoid acknowledging death that way. “Need I remind, you tried to turn away your own brother? That sort of potential was exactly why I brought the thing.”
Ooh. Jumping jaw muscles and gritting teeth and everything now. “He’s only my brother by blood. I hardly know him.”
Ungrateful punk. “He’s the closest thing you got. He deserved to be at that funeral much as you did. ‘Sides, he was born first.”
Dave advanced on Ricky again, hot breath puffing and panting. “My mama’s heart can’t take that kind of shock. I was trying to keep the peace.”
Ricky matched the threat in Dave’s posture. “The person whose behavior was shocking, Church Boy, was yours.” He licked his lips slowly, grinning at the way Dave’s pupils got smaller and larger and smaller again, like he couldn’t decide whether lust or pissed-as-hell was winning in this fight of theirs.
Ricky himself had adrenaline swirling through his veins and a tornado in his belly. Man, this shit was better than a third ride on the Tilt-A-Whirl “I mean damn, any more heated and you and I coulda wound up going to the dirt right there in front of everybody. Bet that woulda really given your poor mama something to— fuck.”
David growled and gripped Ricky’s shoulders, hauling him front-first against the side of the truck. “Shut up. Shut the fuck up!” His breath beat harsh and ragged against Ricky’s ear.
With what air hadn’t been squeezed outta Ricky’s lungs, he laughed at Dave again. Was that the intelligent option? Hell no. This dude had the markers for being at least three colors of crazy. Ricky didn’t back down though, so he’d push until the other guy did.
Or until someone got hurt.
He’d have said no way could this guy kick his ass, not with his glasses and wiry frame, but Dave handled Ricky’s body with a reasonable amount of strength and know-how. Not enough for a total ass-kicking, maybe, but enough to impress. Speaking of impressive…. “If you think I’m gonna be intimidated by the anaconda you’re rubbin’ against my backside, Church Boy, you got another thing coming.” He sucked in a breath. “Gotta tell you though. If fucking in the parking lot is your thing, you really gotta give a guy some advance warning. I would’ve parked in an unlit area.”
Ricky’s most-likely unexpected response must’ve startled Dave into loosening his hands. Ricky twisted Dave’s arm and turned them both, pushing Dave’s back into the truck and Ricky’s fists into Dave’s chest. “See, that’s what I figured,” Ricky murmured with his lips a hair from one mother of a betrayed sneer. “Damn shame, too.”
Dave narrowed his eyes. “What’s a shame?”
Ricky smiled slightly, shaking his head. “You’re all bark, Church Boy.”