EM Lynley is on my blog today! 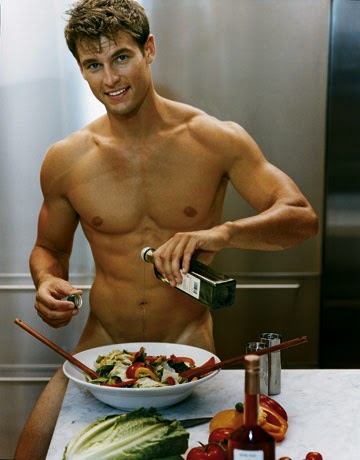 Here’s a scene where he does just that.
This scene isn’t in the book, so if you haven’t read Spaghetti Western (yet), there aren’t any spoilers, but it will give you some idea how much fun Colby and Riley are together. I hope you love it. Enjoy!

Riley had his back to the door when Colby entered the kitchen.
Katrina, Chuck and Willa were nowhere to be seen. It was awfully quiet in the kitchen, even for the lull between breakfast and lunch.
“Did your elves run away or something?” Colby asked.
Riley’s shoulders rose and he swung around. “Hey, I didn’t hear you come in.”
“At least I’ve got your all to myself for a few minutes.” Colby covered the ten feet between them in a second and had Riley wrapped in his arms. Riley relaxed into the embrace and let Colby back him against the counter and kiss him until Colby either had to get their clothes off or back away.
He reluctantly chose the latter. He smoothed the bulge in his jeans and thought how unfair it was Riley wore an apron that hid his arousal.
“I’ve got a surprise for you, Colby.” Riley hopped up onto the counter and hooked a finger in Colby’s shirt collar to pull him back in, then trapped him by wrapping his legs around Colby’s waist.
“I like how it starts.”
“This isn’t the surprise, but you can start thanking me now.” Riley put a hand behind Colby’s head and pulled him close for another mind-blowing kiss. Riley’s tongue knew where to stroke and caress and Colby was jelly—except for his dick—in about ten seconds. Then Riley slid his hand along Colby’s chest, firm against his abs and pecs and across one sensitive nipple and Colby couldn’t help letting out a little yelp.
“Mmmm. You’re gonna kill me or we’re gonna be embarrassed when your staff come back.”
“They won’t be back for a while. They’re in charge of lunch today, so I let them go early after breakfast.”
“So you’re free for lunch?” Colby started to get the picture. “I’m off the rest of the day. So maybe we could…..”
“I already planned lunch for us. Got a picnic just about ready to go.”
“Picnic?”
“Yup. All you have to do is eat. Well, almost.”
“I like the idea of ‘almost.’” He hoped the non-eating part involved them getting out of their clothes. It was suddenly pretty hot in the kitchen. Hotter than usual.

Spaghetti Western
A Novel in the Delectable Series

Cordon Bleu-trained chef Riley Emerson arrives in Aspen, Colorado for a summer at the best restaurant in town, only to discover his jerk of a boyfriend has dumped him, leaving his heart and his plans in tatters. Doubting himself and longing for a change of pace, he takes a low-paying position at the Rocking Z guest ranch, though he expects nature up close and personal won’t hold a candle to his exciting Paris lifestyle.

But all’s not well at the Rocking Z. Unsurmountable financial problems force them to seek a cash infusion from outside investor Fitz Wellington. Fitz is hot for Colby, and he won’t sign on the dotted line without some very personal incentives. The future of the ranch is at stake, and Colby’s just that desperate, but saving the Z might mean losing Riley.

EM Lynley writes gay erotic romance. She loves books where the hero gets the guy and the loving is 11 on a scale of 10. A Rainbow Award winner and EPIC finalist, EM has worked in high finance, high tech, and in the wine industry, though she'd rather be writing hot, romantic man-on-man action. She spent 10 years as an economist and financial analyst, including a year as a White House Staff Economist, but only because all the intern positions were filled. Tired of boring herself and others with dry business reports and articles, her creative muse is back and naughtier than ever. She has lived and worked in London, Tokyo and Washington, D.C., but the San Francisco Bay Area is home for now.

She is the author of Sex, Lies & Wedding Bells, the Precious Gems series from Dreamspinner Press, and the Rewriting History series starring a sexy jewel thief, among others.