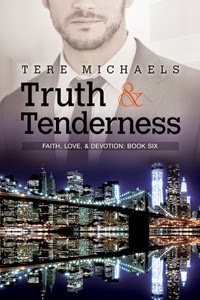 The amazing Tere Michaels answered some questions for me and it's a HUGE thrill to have her on my blog. Her Faith, Love and Devotion series was the first I read in our wonderful genre and I return to those books over and over. The last in the series is out May 1st and here's the blurb:

Newly promoted police captain Evan Cerelli takes command of his own precinct as Matt Haight’s security business begins to expand at a rapid rate. Both of their careers require more and more of their time—away from home and each other. When his most famous clients, Daisy and Bennett Ames, suffer a traumatic breakup, Matt is drawn into a dangerous and dramatic situation. With attentions diverted, Evan and Matt's tight-knit home life begins to unravel.

As Griffin Drake’s movie nears final edit, his thoughts turn toward building a home with his new fiancé, Jim Shea—and maybe even starting a family. Before he can think of a new family, Jim is caught up in his past. The possibility of putting Tripp Ingersoll in jail once and for all beckons, and Jim wants the closure that has long eluded him. As a new lead spurs him on, Jim begins to lose sight of the future by chasing an old ghost.

Both couples struggle to remember that "happily ever after" requires hard work, trust, and tender, open hearts.


I'm so excited! I, of course, already ordered my paperback, and am counting the days until the 1st. So to tide me over, I asked Tere some questions.


What inspired you to write this last book in the series?

I wanted some closure for all these characters and their journeys, as individuals and as couples – of course it could keep going and going but I felt like at some point I needed a “and they all lived happily ever after.” First, I had to come up with a story that satisfied me! Then I set out to create an ending that would satisfy fans.

Is there anything you found particularly challenging about writing this one?
Creating problems but not going overboard with angst! I didn’t want to damage or undo the progress they’ve all made over the previous five books. I didn’t want artificial angst. Everything in the story that’s an obstacle was chosen very specifically, as a challenge to the characters. But honestly? Trapping everyone in an abandoned coal mine because of a killer tornado would have probably been easier.

How did you come up with the title?
Oh gosh – funny story. I needed a title that followed all the previous patterns and that reflected the story. In the middle of this rush to figure it out, I threw my hip/back out and was literally lying on the floor of my dining room with my feet elevated as my friend (and fellow Dreampsinner author!) Elle Brownlee read “T” words from the dictionary! We figured it out though.

Do you have a song or playlist (book soundtrack) that you think represents this book?
I do not! I wish I created playlists for my books but I honestly write to Broadway show tunes/movie soundtracks, and I feel that everyone – except maybe Griffin – would object to a play list made up of those! I will say, the number one song that has influenced a great deal of my mood during this book is “A Thousand Years” by Christina Perri.

So one wonderful random commenter will receive an ebook copy of Truth & Tenderness placed on their DSP bookshelf  on release day. The contest will run from now until next Wednesday, the 28th at midnight EST, and on the 29th a winner will be announced. Please when you comment, do so with the email associated with your DSP account so your book will ce there for you on the 1st.

Tere Michaels unofficially began her writing career at the age of four when she learned that people got paid to write stories. It seemed the most perfect and logical job in the world and after that, her path was never in question. (The romance writer part was written in the stars—she was born on Valentine’s Day.)

It took thirty-six years of “research” and “life experience” and well… life… before her first book was published but there are no regrets (she doesn’t believe in them). Along the way, she had some interesting jobs in television, animation, arts education, PR and a national magazine—but she never stopped believing she would eventually earn her living writing stories about love.
She is a member of RWA, Rainbow Romance Writers, and Liberty States Fiction Writers. Her home base is a small town in New Jersey, very near NYC, a city she dearly loves. She shares her life with her husband, her teenaged son—who will just not stop growing—and three exceedingly spoiled cats. Her spare time is spent watching way too much sports programming, going to the movies and for long walks/runs in the park, reading her book club’s current selection, and volunteering.
Nothing makes her happier than knowing she made a reader laugh or smile or cry. It’s the purpose of sharing her work with people. She loves hearing from fans and fellow writers, and is always available for speaking engagements, visits and workshops. Send here a message through her contact page or connect with her on Twitter (@TereMichaels) and Facebook .