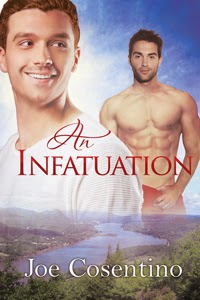 An Infatuation. We’ve all had one—or more than one. What makes us lose our minds over someone not right for us? Especially when we are young? That sense of urgency and desire is overwhelming. And the most amazing kind of infatuation is one that lasts for many years. Think about your first infatuation. There’s nothing more powerful.
I was thinking back to my high school days, and how difficult it was back then for a gay teen. Lab partners, gym locker rooms, and club meetings were vitally important. At my high school reunion, I realized that all the homophobes had come out as gay. A story was born. It started as a one-act play, which resulted in hysterical laughter and sobbing tears from the audience. When I read about Dreamspinner Press, I knew I had to expand it into a novella. The Bittersweet Dreams category was perfect since the story is so funny, so romantic, and at times so sad.
While the plot is fictitious, Harold is based on me, and some things I went through in high school. That huge medicine ball really was my enemy in high school! I admire Harold’s resilience, honesty, intelligence, wit, and ability to keep going in trying situations. Harold’s devotion to his spouse is admirable, as is his honesty about his teenage infatuation with Mario. Stuart, Harold’s devoted spouse, is very much like my devoted spouse who makes lists about lists. Mario is a combination of many supposedly straight, perfect guys I met when I was an actor. Guys who are so easily the object of others’ infatuation. I love that the story spans twenty years so we see Harold (and Mario) develop and mature in their special relationship. I also love that Harold and Mario come full circle at their high school reunion. The wacky and touching supporting characters throughout the story (classmates, teachers, family members) add color and another level of substance. I want to play Mr. Ringwood, the principal, in the movie version!
It has been so heartwarming and gratifying for me to hear from so many reviewers and readers who love AN INFATUATION and beg for a sequel. While a sequel is not in the near future, my next Bittersweet Dreams novella releases this fall from Dreamspinner Press. It is another memory piece filled with humor and tragedy. Since I am a college theatre professor, it takes place in that world. Look for it this fall—A SHOOTING STAR!
In the meantime, email me on my web site and let me know how you like AN INFATUATION. I love hearing from readers. Happy infatuations!

Blurb:
With his ten-year high school reunion approaching, Harold wonders whether Mario will be as muscular, sexy, and tantalizing as he remembers. As a teenager, it was love at first sight for Harold while tutoring football star Mario, until homophobia and bullying drove Mario deep into the closet. Now they’re both married men. Mario, a model, is miserable with his producer wife, while Harold, a teacher, is perfectly content with his businessman husband, Stuart. When the two meet again, will the old flame reignite, setting Harold’s comfortable life ablaze? How can Harold be happy with Stuart when he is still infatuated with his Adonis, his first love, Mario? Harold faces this seemingly impossible situation with inimitable wit, tenderness, and humor as he attempts to reconcile the past and the future.

A Bittersweet Dreams title: It's an unfortunate truth: love doesn't always conquer all. Regardless of its strength, sometimes fate intervenes, tragedy strikes, or forces conspire against it. These stories of romance do not offer a traditional happy ending, but the strong and enduring love will still touch your heart and maybe move you to tears.

Joe Cosentino is the author of An Infatuation (Dreamspinner Press), Paper Doll, the first Jana Lane mystery (Whiskey Creek Press), Drama Queen, the first Nicky and Noah mystery (Lethe Press-releasing this summer), and The Nutcracker and the Mouse King (Eldridge Plays and Musicals). He has appeared in principal acting roles in film, television, and theatre, opposite stars such as Bruce Willis, Rosie O’Donnell, Nathan Lane, Holland Taylor, and Jason Robards. His one-act plays, Infatuation and Neighbor, were performed in New York City. He wrote The Perils of Pauline educational film (Prentice Hall Publishers). Joe is currently Head of the Department/Professor at a college in upstate New York, and is happily married. His upcoming novels are Porcelain Doll (the second Jana Lane mystery), Drama Muscle (the second Nicky and Noah mystery), A Shooting Star (Dreamspinner Press novella), A Home for the Holidays (Dreamspinner Press holiday novella).