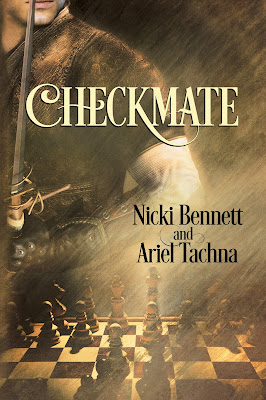 I am so happy and excited to share the new cover for one of my favorite books with you all: Checkmate.

Back in 2009 when Checkmate first came out at DSP I was hesitant to read a historical. They were not my favorite things unless there were Scottish lairds in them so I decided to skip the book. But the thing was, the authors. The authors had me curious. I had already read several books by Ariel Tachna by that time and Hot Cargo by both and so based on that, by the quality I knew I'd get, I decided to at least read the excerpt... and the rest is history.

I can't say enough about how much adventure and romance is crammed into the pages of this book. Teo is one of my favorite heroes--excuse me while I swoon--a swashbuckler, a champion, a passionate and gentle lover, a fierce protector, a loyal friend, and a wonderful surrogate father all wrapped up in a gorgeous and vulnerable and wicked package. He's utterly perfect and you'll fall as madly in love with him--and Christian--as I did. I have no doubt. And now Teo and Christian have a stunning new cover by the amazing Reese Dante that I just love because I think it gives a perfect overall idea of the feel of the book--quiet sexy times punctuated with danger and intrigue. The new cover edition is out on July 25th. If you missed it the first time, don't miss it a second.

Blurb:
When sword for hire Teodoro Ciéza de Vivar accepts a commission to “rescue” Lord Christian Blackwood from unsuitable influences, he has no idea he’s landed himself in the middle of a plot to assassinate King Philip IV of Spain and blame the English ambassador for the deed. Nor does he expect the spoiled child he’s sent to retrieve to be a handsome, engaging young man.


As Teodoro and Christian face down enemies at every turn, they fall more and more in love, an emotion they can’t safely indulge with the threat of the Inquisition looming over them. It will take all their combined guile and influence to outmaneuver the powerful men who would see them separated… or even killed.

Growing up in Chicago, Nicki Bennett spent every Saturday at the central library, losing herself in the world of books. A voracious reader, she eventually found it difficult to find enough of the kind of stories she liked to read and decided to start writing them herself.

When Ariel Tachna was twelve years old, she discovered two things: the French language and romance novels. Those two loves have defined her ever since. By the time she finished high school, she’d written four novels, none of which anyone would want to read now, featuring a young woman who was—you guessed it—bilingual. That girl was everything Ariel wanted to be at age twelve and wasn’t.
She now lives on the outskirts of Houston with her husband (who also speaks French), her kids (who understand French even when they’re too lazy to speak it back), and their two dogs (who steadfastly refuse to answer any French commands).
Visit Ariel:
Website: www.arieltachna.com
Facebook: www.facebook.com/ArielTachna
E-mail: arieltachna@gmail.com
Posted by Mary Calmes at 8:04 AM