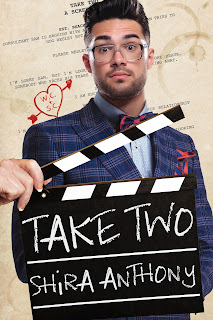 I'm very excited to have the wonderfully talented Shira Anthony on my blog today chatting about her newest release, Take Two, which I so loved because it's the kind of shmoopy romance I adore. You know, the one where the guys who should be together get a second chance and you root for them the whole way. It's funny that there's a movie being made in the book because the book itself would make a great romantic film. Wesley and Sam have that snarky, hot banter going with heat and yearning between them. I scooped it up as soon as it come out. But enough of me, here's Shira to talk about the book:

Take Two is a sweet and funny story about getting a second chance at true love. Some angst, some adventure, hot sex, and lots of silliness and romance.

Wesley’s a slightly uptight college history professor. Sam is a Hollywood superstar. Entirely different personalities, but they fit well together. At least they did until Sam’s career took him away from Wesley and their life in New York City. Wesley’s the first one to admit he still loves Sam, but his heart has just started to heal and he’s doing his best to move on. Sam, on the other hand, knows he wants Wesley back and he’s willing to grovel if he needs to. Sam conspires to take a role in a less than D quality movie about a pirate that’s being filmed on location at the North Carolina coast, and manages to trick Wesley into consulting on the movie. But will Sam’s over the top antics to get Wesley back work? Maybe. Maybe not.

Lights, camera, action! When Professor Wesley Coolidge accepts a summer job as a historical consultant to a pirate movie being filmed in North Carolina, the last person he expects to bump into is his soon-to-be-ex, movie star Sander Carson.

Just like the flamboyant pirate he’s playing, Sander, aka Sam Carr, is used to getting what he wants, and he makes it clear he wants Wesley back in his life. Sam lost Wesley when he left their life in New York City behind for a career in Hollywood. But Wesley has finally managed to put the pieces of his heart back together, and he isn’t interested in Sam and Wesley: The Sequel.

Convincing Wesley to give their relationship a second chance will take much more than Sam’s apologies and reminders of good times past. If Sam wants Wesley back, he’ll have to show Wesley that they really can sail into the sunset together—a real-life happily-ever-after that won’t end once the final credits roll.

About Shira: Shira Anthony was a professional opera singer in her last incarnation, performing roles in such operas as Tosca, Pagliacci, and La Traviata, among others. She’s given up TV for evenings spent with her laptop, and she never goes anywhere without a pile of unread M/M romance on her Kindle.
Shira is married with two children and two insane dogs, and when she’s not writing, she is usually in a courtroom trying to make the world safer for children. When she’s not working, she can be found at the Carolina coast aboard Land’s Zen, a 35’ catamaran sailboat, with her favorite sexy captain at the wheel.
Want to hear Shira sing? You can listen to an excerpt from a live recording of Shira performing Tosca on her website: http://www.shiraanthony.com/wp-content/uploads/2012/06/tosca-visse-darte-exceprt1.mp3