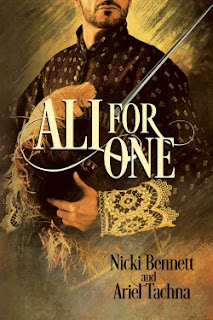 Back in 2010 when All For One by Bennett & Tachna first came out, I remember being sort of disappointed because the story wasn't about Teo and Christian again. I had fallen in love with those two reading Checkmate and wanted there to be more. And there is because the musketeers end up being friends with the English ambassador and his bodyguard, but  the whole book isn't about them. So I went into All For One sort of growly and grouchy but as they say, a funny thing happened...I fell madly and completely and more-in-love with Léandre and Perrin than I ever was with Teo and Christian. And I loved Teo and Christian so...

The second book starts out with a threesome, Aristide, Léandre, and Perrin. They are, three of the King's musketeers and they sleep together and they love each other--as buddies--and are inseparable. Right away, I loved Léandre and Perrin. They're both funny, gorgeous, loyal, deadly, funny (did I mention the funny?), and though we see it, the reader, the two men miss for a bit the fact that they are MADE for each other. Don't get me wrong, Aristide is great too. But Aristide is perfect. Like annoyingly so. He's the best of them and I'll be honest, I wasn't feeling him until the musketeers meet Benoît on the road. He's carrying a note that basically says that their boss, the man the musketeers all report to and keep on a pedestal is a traitor. And it's not true but to figure out the mystery of who's behind the plot, they have to keep Benoît alive. Well once Aristide starts protecting Benoît and we see that relationship grow, I understood that Aristide only "seemed" perfect and he became endearing. So I really liked him, I liked Benoît too but for me, the real draw, the heart of the story, is Léandre and Perrin. Everyone has their favorites. I'm sure there are people who prefer the first and think that Léandre and Perrin, the way they banter and tease and how snarky they are with each other and how loud they get in the sack, is crass. The thing is, in this book, you have the idealized love that grows from mutual appreciation and trust in Aristide and Benoît and then you have the love that grows organically from day-to-day friendship into something powerful and possessive in Léandre and Perrin. And Léandre and Perrin are melt-the-paint-off-the-walls hot. Here look:

*swoon* Perrin is my favorite in the whole All For Love series, he took over Teo's spot with this book because he's vulnerable and sexy and stuffed full with bravado but fiercely loyal and he'd give his life without question for the man he loves. When he jumps in, he's there forever. He's not to be missed.
I'm so thrilled that these books got re-edited and re-covered and even if historicals aren't your thing--because I'm not crazy about them as a rule either--this series is different because the characters are there front and center and how can you ever go wrong with sexy swordsmen?
Posted by Mary Calmes at 9:02 AM