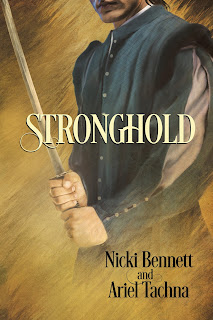 I'm so excited to be hosting Nicki Bennett and Ariel Tachna today as they reveal the cover for Stronghold, the third book in their All For Love series. It's funny but lately I've been watching Scarlet Heart Ryeo which is a Korean Drama about a woman from the 21st century who gets caught in a solar eclipse and is then transported back in time to the Goryeo Dynasty. And you're probably wondering what this has to do with Stronghold but it's got me thinking about historicals and I realize that as for as romantic heroes go, you really can't go wrong with swordsmen from a bygone era. It's like when I watch Outlander and swoon over Jamie Fraser as much as I did when I was reading the books. Even though living in the past is not appealing from a quality of life standpoint, there is something to be said for the men--at least in romance novels--who lived during those times. Scottish lairds, Samurai warriors, King Arthur, and French musketeers have always been at the top of my list. I knew when I read the first book in this series that I would be hooked for life and as the books have progressed, I just fall further in love with all these guys. I love the title of the third book as it works on more than one level and the cover by Reese Dante is just stunning. The book will be released on November 28th and I for one can't wait!

All for Love: Book Three
“Are you surprised that strength is drawn to strength?”
For the last six years, the gypsy healer Raúl has lived a life he never dreamed possible. Gerrard Hawkins has stood at his side, his love a source of silent strength like nothing Raúl has ever known.
When a letter from Gerrard’s estranged father forces them in separate directions—Gerrard back to England to make peace with his family and Raúl to Saintes-Maries-de-la-Mer for his annual pilgrimage—Raúl expects to suffer for their parting, but he holds on to their plans to meet again in France when Gerrard has satisfied his father’s demands.
Gerrard left England never expecting to return, especially after he pledged his life and love to Raúl. Yet he cannot dismiss his father’s offer of peace without some acknowledgment. When he arrives in England to find tragedy, his sense of duty toward his family’s tenants wars with his promises to Raúl.
As tensions mount and illness spreads in France, Raúl stands as a bastion of hope, but his strength is not limitless. Gerrard is the rock he leans on, and without that strength, Gerrard’s arrival in France may come too late.

Growing up in Chicago, Nicki Bennett spent every Saturday at the central library, losing herself in the world of books. A voracious reader, she eventually found it difficult to find enough of the kind of stories she liked to read and decided to start writing them herself.

When Ariel Tachna was twelve years old, she discovered two things: the French language and romance novels. Those two loves have defined her ever since. By the time she finished high school, she’d written four novels, none of which anyone would want to read now, featuring a young woman who was—you guessed it—bilingual. That girl was everything Ariel wanted to be at age twelve and wasn’t.

She now lives on the outskirts of Houston with her husband (who also speaks French), her kids (who understand French even when they’re too lazy to speak it back), and their two dogs (who steadfastly refuse to answer any French commands).