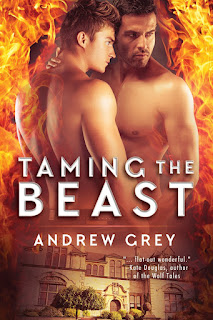 Good morning all, I'm so excited to have Andrew Grey on my blog today to share and excerpt from his new book, Taming the Beast which will release on Friday October 13th, tomorrow, yeah!


I want to take a minute to thank Mary for having me.  She is a wonderful friend and her work helps inspire some of my own.  For me Taming the Beast is a special story.  I love the Beauty and the Beast movies and I have always loved the archetype. Opposites who see more in each other than anyone else.

Dante desperately needs someone to see beneath his exterior and his self-imposed isolation, but he doesn't realize it.  Not until Beau, an ordinary looking man with an extraordinary heart, takes the time and the risk to try to see past the rumor and myth the town has concocted.

I like to think that at some point in our lives we all need a Beau, someone to see us for who we are and to look further than our outer shell and even the walls we build for ourselves.

And now the blurb:

The suspicious death of Dante Bartholomew’s wife changed him, especially in the eyes of the residents of St. Giles. They no longer see a successful businessman… only a monster they believe was involved. Dante’s horrific reputation eclipses the truth to the point that he sees no choice but to isolate himself and his heart.

The plan backfires when he meets counselor Beau Clarity and the children he works with. Beau and the kids see beyond the beastly reputation to the beautiful soul inside Dante, and Dante’s cold heart begins to thaw as they slip past his defenses. The warmth and hope Beau brings to Dante’s life helps him see his entire existence—his trials and sorrows—in a brighter light.

But Dante’s secrets could rip happiness from their grasp… especially since someone isn’t above hurting those Dante has grown to love in order to bring him down.

Dante sat at his desk, looking up from his work and right at the framed picture the kids had given him. Every time he took a break, there it was. When he’d told Roberts to find an appropriate place to hang it, he hadn’t really meant on his office wall right in front of him, where he saw it every time he looked up.


For the last two weeks, he’d seen it and even stopped to gaze at the children’s drawings of themselves, and damn it all if he didn’t think of Beau and his intense eyes every time. Beau wasn’t handsome, or even generally good-looking in a conventional way, but he had spirit and fire and was willing to let them show. Dante had done his best to bury himself in work and in the preparations for his upcoming trip to Europe. He’d originally planned to leave in a week, but orders and the work they’d need to do at the plant to fill them had delayed his trip. So instead of going to London first, he’d moved that stop to last and kept the rest of his itinerary intact.

Roberts knocked and then entered Dante’s office with a tray. He set a cup of coffee on the edge of the desk, along with a plate of cookies. They were the oddest-looking cookies he’d ever seen, more oblong than round and a little lumpy.

“Did Harriet make these?” If she had, he’d begin to wonder if she was starting to slip.

“No. These were sent to you from the children.” Roberts pointed to the drawing on the wall.

“Apparently you were nice to one of them at the dinner and he wanted to say thank-you. He and his friends baked some cookies for you, and Mr. Clarity had them sent over.” Roberts left the office, and Dante picked up a cookie and took a small bite. They were good, if a little dry, but nice with the coffee.

He looked up once again and saw the picture. “Roberts…,” Dante called, and his office door opened, Roberts entering once again. “Please call the Community Center and tell Mr. Clarity that I’d be willing to volunteer… say, on an afternoon or evening later this week, to help out.” Dante smiled because he knew that somehow Roberts had a hand in this. “In fact, we’re all going to volunteer, including Harriet.” Misery loved company, after all.

Dante went back to work, strangely excited about seeing Beau again. He wasn’t sure if this was a good idea or one of the stupidest notions ever conceived. But it would make Yates happy. Yes, that was it. He was doing this to help improve his image in the community.

Dante told himself that over and over that afternoon in the hope that he’d eventually come to believe it, but he wasn’t sure it worked.