We're Baaa-aack ~ With A Brand New List of Books We Loved in August and September!

Hi, friends, and welcome to a heaping helping of book recs for you! I had some real-life stuff going on at the end of August/early September that kept me from getting to the Book of the Month post, so we’ve doubled-up this month with some really great titles for you, as well as the chance to win Two eBooks of choice from the list, so check out what’s up for grabs, and thanks for stopping by! ~ Lisa
============ 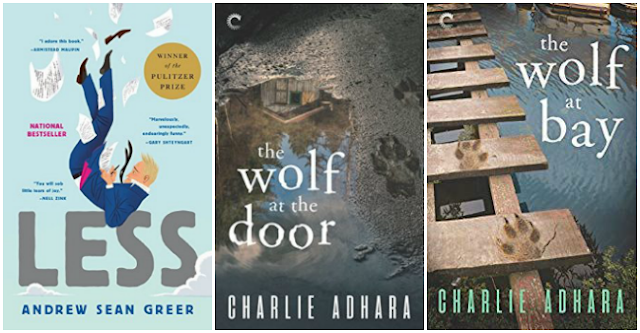 Jules – Less by Andrew Shawn Greer – “Winner of this year’s Pulitzer Prize for fiction, along with many other accolades, Less is all the things: funny, smart, poignant, touching, heart-warming, and probably several other adjectives, depending on individual reader’s perspectives. I loved it so much, there is no doubt that Less will be included on my top books of 2018 list.”
The Wolf at the Door/The Wolf at Bay by Charlie Adhara – “I am absolutely LOVING this series, you guys. I fell in love with Cooper Dayton and Oliver Park in Charlie Adhara’s first book, The Wolf at the Door, and fell even harder in the sequel. The new book, The Wolf at Bay, picks up about four months after the first one ended. Park and Dayton are still partnered up, working for the BSI, solving cases involving werewolf crimes, and working together seamlessly, but as they also grow closer in their personal relationship, Cooper begins to struggle with how to label what’s going on between them. Or, to be honest, with figuring out what it even is that’s going on. Are they just fuck buddies? Boyfriends? Possibly more? Cooper is pretty sure he wants more. He’d love to take their partnership to a new level outside of work, but isn’t sure what Oliver wants, and he’s such a goofball he can’t even figure out a way to just talk to Park.” 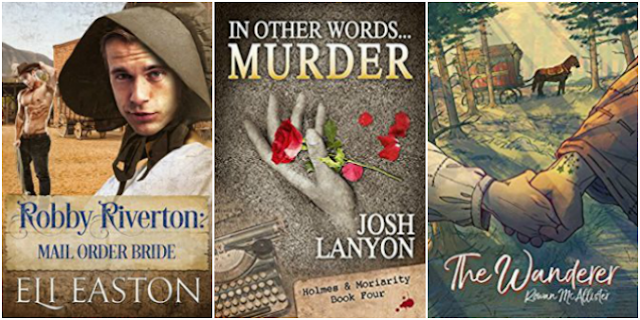 Sammy – Robby Riverton: Mail Order Bride by Eli Easton – “Robby Riverton: Mail Order Bride is simply outstanding, an incredible story, and I highly recommend it to you.”
In Other Words… Murder by Josh Lanyon – “The mystery elements were spot on as well, and as usual the climax to the story had me on the edge of my seat wondering how Kit was going to manage to save his hide once again. As always a Holmes & Moriarity novel is top notch, and I am thrilled that we will be receiving yet another installment in the future. Until then, I encourage you to pick up In Other Words…Murder post haste. If you haven’t yet indulged in this series, please do. It is a gem of a mystery series and heaps of fun to boot.”
The Wanderer by Rowan McAllister – “I cannot tell you how well this novel was laid out. The Wanderer may be just an introduction to another world and its unique inhabitants, but I must tell you that not once did I feel lost or confused despite all that was going on in this story. Author Rowan McAllister creates a fascinating world and gives us three characters who capture the imagination and the heart. The sarcastic repartee between Bryn, whose current form is a large black horse, and Lyuc is really delightful. McAllister uses their mental link and subsequent discussions to reveal much about both man and creature, and gives us a taste of the bond they have in each other.” 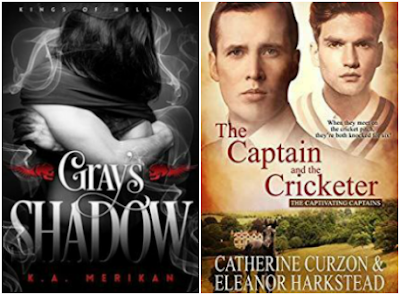 Carrie – Gray’s Shadow by KA Merikan – “Gaaaah, this series is so good! Ok, now that I got that out. Seriously, this series is fantastic. Gray’s Shadow is book four in the series, and it is not a standalone. There is one overarching storyline to these books, and you have to start from the beginning with Laurent and the Beast and read in order. Yes, each book is ultimately about a member of the club getting their romantic HEA, but if they don’t solve the ultimate mystery, none of them will live to care anyway. You see, there’s this demon that lives in the mirrors of the clubhouse. He has a plan he’s been hatching for quite some time, and it’s about to come to fruition unless the Kings of Hell can somehow stop him. Cue creepy music, ha!”
The Captain and the Cricketer by Catherine Curzon and Eleanor Harkstead – “This is a story about second chances, righting what is wrong, standing up for what and who you believe in. And cricket. Winding through the story is the meandering thread of cricket, the emotions and feel of the game and what can happen on the pitch when you least expect it. There are layers of stories here, with a mystery to solve and an evil bully to take down. The secondary characters play their parts well and support the main storyline nicely. I will say my favorite supporting character was a horse. There was a special horse in the first book of the series also… hmmm, I’m sensing a theme. Ha!” 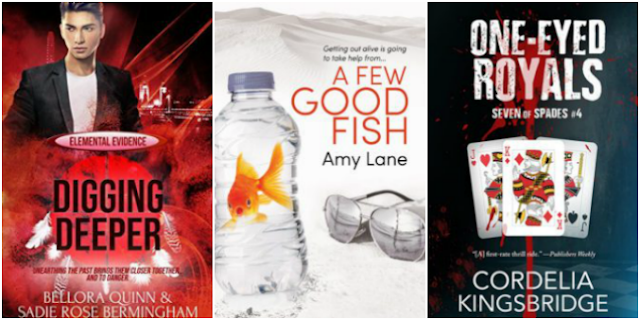 Maryann – Digging Deeper by Bellora Quinn and Sadie Rose Bermingham – “One thing I have to say is that the writing team of Quinn and Bermingham keeps taking the elemental powers to the next level. This plot is dark and gritty, and the abuse is beyond horrendous and is a major factor in tearing down a growing trust between Mari and Jake. Even though they take a big step in their relationship, along with a new profession for Jake, there’s still a crack in their bond. The authors make it difficult, and I want both Mari and Jake to find that peace and trust for their relationship become more solid.”
A Few Good Fish by Amy Lane – “A Few Good Fish is a great read and a page turner! It’s packed with lots of danger, explosive action, suspense and snark. A dangerous military officer coming back onto the scene with men trained as killing machines, was scary and brilliant. But, I don’t think this is over yet. There’s so much love and heartwarming and heart-wrenching moments between Jackson, Ellery, and Ellery’s mother, Lucy Satan, and there’s a great cast of characters that return, including Jade, Mike, Kaden, Ellery’s dad, and a three-legged tomcat. I really liked the pairings and the contrasts and similarities of the couples in the book: Jackson and Ellery, Ace Atchison and Sonny Daye, and the new addition of Lee Burton and Ernie Caulfield.”
One-Eyed Royals by Cordelia Kingsbridge – “Not only is One-Eyed Royals an excellent read, but it’s action-packed, explicit and violent; it’s gritty, gory and jaw dropping!! And just when you think you know both Levi and Dominic, the tables are turned. Not only do Levi and Dominic shock each other, but anyone who follows this series will be shocked too! The Seven of Spades-Levi-Dominic triangle becomes more ominous as Seven issues a horrendous ultimatum. Will Dominic or Levi be able to make the final decision?” 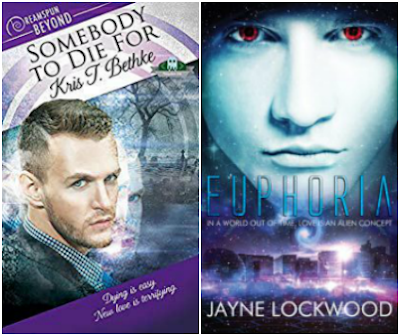 Lindsey – Somebody to Die For by Kris T. Bethke – “Though I had the issue with their anchor and ghostwalker bond, everything else about Jameson and Avery hit me right in the feels. From the sweetness they shared, to Avery’s journey in moving forward without letting go of his love for Luke, and the way they communicated with each other, it just worked. They were both complex, and watching them both grow separately and together was very satisfying, and hit that need for a good hurt/comfort read. Kris T. Bethke continues to deliver with the Requiem Inc. series, and I can’t wait to read the future MCs I think are coming.”
Euphoria by Jane Lockwood – “Euphoria has so many different components that were then expertly woven together to deliver a fascinating and, in some ways, a terrifying story. First, we have a not-too-far-off future which is the catalyst for an apocalyptic event that basically wipes humans and animals from the world in the span of one-hundred years. Next, we have alien species that finds earth in 2125, along with what is left of the humans, and they become fascinated and eventually want to save humans from their destined future. In order to change the course humans are on, the reader is pulled into a story of time travel, romance, friendships, redemption, greed and some other unforeseen plot twists which kept my attention.” 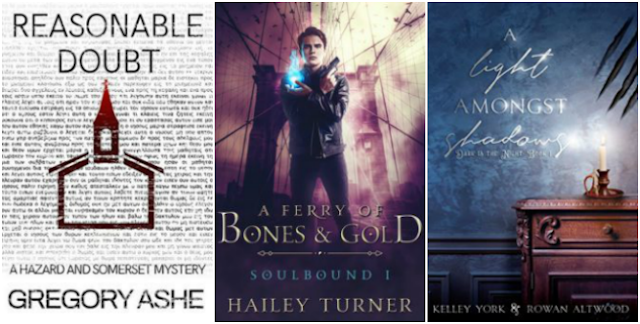 Lisa – Reasonable Doubt by Gregory Ashe – “Gregory Ashe’s talent for telling a compelling story is matched in his ability to create atmosphere in each and every scene. Wahredua, Missouri, is a character unto herself, and its population adds its own flavor to the setting—often not in a positive way. Each metaphor, rather than distracting from the narrative, adds to the tone and ambiance, allowing the reader to immerse themselves in every scene and to connect with the role players. Regardless of how significant or fleeting a character’s part in the storyline might be, drawing a mental picture of that person is made possible by descriptions that enhance their presence. One character in particular, a boy who was indoctrinated into and then misused by the cult, was especially powerful.”
A Ferry of Bones & Gold by Hailey Turner – “To put none-too-fine a point on it, A Ferry of Bones & Gold is one of the best Spec Fic books I’ve read so far this year, or any other year for that matter. If you like Urban Fantasy at all, go buy this book now. If you’ve never read Urban Fantasy but love a richly detailed and brilliantly told story filled with all manner of mythological and supernatural beings, go buy this book now. Ilona Andrews’ Kate Daniels series used to set the UF bar for me, but the Soulbound series might become my new measuring stick—it’s just. that. fabulous.”
A Light Amongst Shadows by Kelley York and Rowan Altwood – “Call this novel what you will: Gothic Horror, Historical Romance, Murder Mystery, or Ghost Story, they all apply, but there’s one word I’d use to sum up the entirety of A Light Amongst Shadows. That word is sublime. I could also say it’s stunning, provocative, suspenseful, heart-wrenching, lyrical, enthralling…all those plus many more superlatives would be true. It is also romantic, sweetly and heartbreakingly so. The setting is absolute perfection, as every Gothic Horror novel should have its dark and drafty hallways and dismal atmosphere to inspire the proper invitation to menace and into which the spirits of the dead might appear and wreak havoc on the innocent.”
============
And that does it for this time around. Until next month, happy reading!!!
THE GIVEAWAY
a Rafflecopter giveaway