New book and New series in the New Year 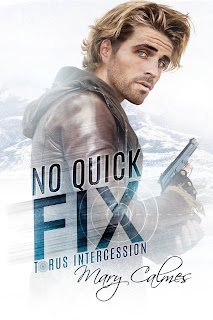 I haven't blogged in a billion years, or that's what it feels like, but there's news I want to share.

I have a book coming out on March 19th on Amazon, and it's the start of a new series about fixers. But these guys aren't just bodyguards and they're definitely not "fixers" in the traditional sense. They "intercede" on your behalf, hence the part of intercession in the series name. So while in the next book, my fixer is hired as a bodyguard, in the first book, No Quick Fix, Brann is hired to be a nanny. Or a "manny" as it were.

I love the nanny/manny trope. The idea of the person taking care of the mother or father's children being the person they should be with has many incarnations. There are of course many wonderful romance manny books but also a whole slew of TV shows from The Nanny, to Who's The Boss, both of which have the caregiver of the kids eventually marrying the person whose kids they were there to take care of. But it makes perfect sense.

For a single-parent who is either divorced or widowed, the most important people in their life are their children. Watching another person nurture the focus of your world, learn to love them, protect them, and laugh with them... how does love not follow pretty darn fast? That's the part I love reading, and now, writing. Because I thought, what could up the ante on the idea of the manny? And it hit me that a trained military man having to take care of kids, though not new, would be so much fun to mess with. Imagine the chaos that children would bring to the world of a man who's skilled in making instant life and death decisions? Because yes, he can jump out of airplanes, swim through shark-infested water to help storm a beach or even render someone unconscious with a paperclip, but can he make a nutritious dinner with all the main food groups represented? Help with homework? Create a decent looking ponytail, deal with a field trip, clean up after a kid with the stomach flu or manage after school activities piled up on each other? That right there is fun to imagine. And of course, it was important to show the story from both sides. Because while the manny is bending over backwards to figure out what the kids need, the kids are looking to him to provide safety and stability and of course understanding. He has to be both confidant and disciplinarian. It's a hard road to walk because you're not the parent, but you're expected to act like one at times. And of course, laugh. That's just as important as all the other things, at least to kids. It also helps keep the adults sane.

If I did my job, when you read the first book in my new series, you'll get an idea of what Torus Intercession usually does and see what fun Brann is faced with in the small mountain town of Ursa, Montana. I hope you all enjoy it.

A retired SEAL is about to face his toughest assignment yet. As a nanny...

Fixer. Bodyguard. Advocate. Brann Calder is expected to play all these roles and more as a member of Torus Intercession, a security firm guaranteed to right what's wrong. In the military, catastrophe was his specialty. Five months out of the service Brann is still finding his way, so a new assignment might be just what he needs. Unless it includes two things to make a seasoned, battle-trained veteran nervous: life in a small town, and playing caretaker to two little girls.

Emery Dodd is drowning in the responsibility of single fatherhood. He's picked up the pieces after losing his wife and is ready to move on now, hopeful that his engagement to a local patriarch's daughter will not only enrich his community but will grant his daughters some stability too.

The only thing standing in Emery's way is that he can't seem to keep his eyes--and hands--off the former soldier he's hired to watch his girls until the wedding.

Emery's future is riding on his upcoming nutptials, but being with Brann makes him and his family feel whole again. Too bad there's no way for them to be together.